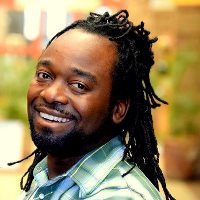 Elson Kambalu is a visual artist/curator/gallerist/film maker based in Lilongwe, Malawi. He is increasingly drawn to conceptual and participatory work and he is interested in listening to, sharing people’s stories, and creating works that stimulate debate.

Elson has exhibited extensively, and his work has appeared on BBC, CNN, and numerous broadcasting houses across the world. He owns several galleries in Malawi including Art House Africa, and he works with more than 150 artists, collecting and connecting them to clients within and outside Malawi.

In 2015, he was chosen as one of the 10 most innovative people of his country.